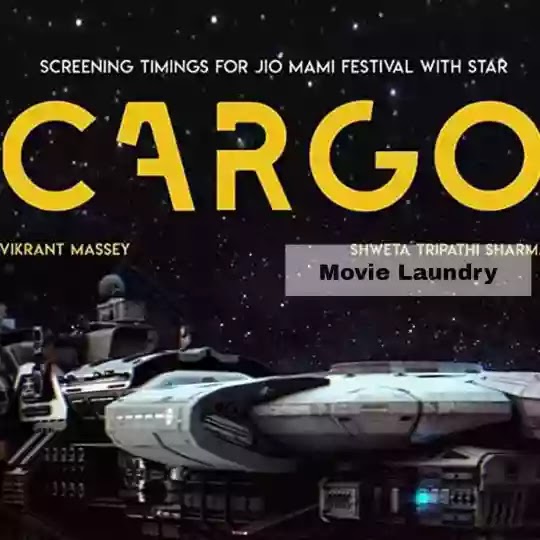 Cast: Vikrant Massey, Shwetha Tripathi,
Nandhu Madhav, Armaan Mirza,
Ritwik Bhowmik, Prabal Panjabi,
Anjum Rajabali, Biswapati Sarkar,
Konkona Sen Sharma.
Director: Arati Kadav.
Language: Hindi.
Cinematography: Kaushal Shah.
Music Director: Sagar Desai.
Release date: 9 September 2020.
Running time: 1hr 53mins.
Genre: Fantasy, Horror, Sci-Fi.
What’s there in this film?.
Cargo (2020) is a completely different script than we think by seeing the posters like it is a space film.
The one-line story is hero and heroine prepares people after death for resurrection by making some changes in the soul, at some point healing power of heroine is gone and then the story is how she regains her power and the stories of different people who came to that space ship.

When I first saw the intro and space ship scenes I thought it was a space film but the truth is it is more like horror film without any thrilling scenes.

Though the whole story sets in a spaceship, it looks like a room with few LED lights, the fact is you can’t feel that as a space ship and that place as space in any one of the scenes of this film.

There are many famous faces throughout the film, the acting of the cast is also not bad they just did what is required,Vikrant Massey as Prahastha played Young man character who lives a boring life in spaceship lonely for many years.Shwetha Tripathi as Yuvishka Shekar did an okayish performance.

Good characterisation but still needs some tinting works, that’s my thought. their story portraying is also not bad, you can’t guess but my thought is there is also something missing to fulfil the story, it ends more like a short film without that much weightage.

What’s not there in this film?.

The main negative of this film is visuals and cinematography works, they just wasted the fresh script by their poor visuals and special effects.

The truth is you can’t feel that space ship in any one of the scenes in this film, they just used one room with few Lighting works as a spaceship and also wasted us.

Their story also seems like a short film without much weightage, they dragged the simple story into 2hrs with many boring scenes without much crisps, that’s my thought.

It fits all the two main leads, Vikrant Massey and Shwetha Tripathi.

Because of their average performance.

The whole story takes place in 2027, the whole world was changed like they sent the people for transition centre for resurrection for a better afterlife.hero also works on it.

They send the heroine to replace the hero because he needs to retire and also for he has been working for so many years.

But the problem of this story is, heroine, lost her power on one day for overusing it, so they also wanted the heroine to return back to earth.

After that how she got her power again this is the remaining story of this film.

Fresh script but lost its importance because it’s poor visual, the truth is I just wasted my time on watching this senseless scripts.for you, watch some other better films than this one.